Episode 6: Dr. Martinez shares a story about being arrested for being white and offers a perspective on prejudice with help from the ideas of General Semantics’ scholar Irving Lee.

General semantics is a practical approach to the study of language habits and their influence in human affairs.

In the 1940’s Irving J. Lee helped to bring General Semantics to broader audiences in his book, Language Habits in Human Affairs.

One of the key assumptions of General Semantics is that people for the most part are unaware of how language habits influence their perceptions of the world.

The world of not-words is the world of silent sensations, of sensory perception.

It is the world were wordless plants and speechless animals grow, develop, and die.

It is the world of process, of flowing rivers, changing weather, and of sunrises and sunsets.  It is a world that proceeds and flows, doing what it does without the need for use of language. There is a fullness and density of details, an inexhaustible majority of which are unseen and unknown.

Life and human existence is an ever unfolding, wordlessly silent process.

The world of words, on the other hand, the world of talk about the process character of life and human existence.

A “tree” is word.  But the direct experience of any particular tree-in-process is not the word “Tree.”

When we confuse words for things, when we assume that to have a word for some thing-in-process is to KNOW that thing, then we fall prey to misunderstandings.

Because all of life and human existence is a process, more can ALWAYS be said about any situation, event, person, or thing.

But when we jump to the conclusion that we “know” particular situation, person, or thing because we can describe what is happening in words or because we “know this story” we do so only by ignoring many other possibilities of making sense of that event, person, or thing.

In short, we mistake words for things.

We jump to conclusions.

One of the key practices that General Semantics encourages is the “delayed reaction.”  A delayed reaction is the practice of slowing down your immediate response to some triggering event.

You hear a negative word.  You read a shocking story.  And you react to it as though it were the honest to God’s truth.

A delayed reaction would not dismiss your immediate gut level response, but would instead accept those sensations that come up for you as you also search for other possible interpretations and meanings of that triggering content.

You go: SHHHHHHHHhhhhhhhh  and actually look before you accept the stories in your mind about other people, situations, or events. 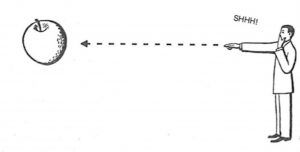 The purpose of a delayed reaction is not to make us less feeling or caring, but to help use maximize the information available to use so we can think or reason more clearly because we have more details from the living process character of the not-words world.

We always live first and primarily in the world of not-words.

Through the use of the delayed reaction, we help transform noise of the process, its thickly dense flux of inexhaustible meanings, into knowledge that we can then use to make a more informed decision and reaction.

Is the problem of fake news really that the news is fake, or that some journalist acting on partial information rushes to publish a story for click bait?

Is the problem of fake news really that the news is false, or that some readers, reacting only to the headlines without direct experience of the article itself, jump to conclusions and feel outraged?

Is the problem that cops are violent and racist, or that particular cops, not delaying their reactions, jump to conclusions about a suspect, a person, and event, and make poor decisions with partial information?

This podcast episode explores what happens when police officers jump to conclusions.